Join us for a grand finale to the hotel’s 35th anniversary celebrations, and a commemoration to Raymond Blanc's 70th birthday. Anticipate an evening of culinary decadence and musical excellence, courtesy of cellist Sheku Kanneh-Mason, the brightest young star on the classical music scene. Sheku became a household name after his enchanting solo performance at the wedding of the Duke and Duchess of Sussex. He won the 2016 BBC Young Musician competition and his album, Inspiration, spent many weeks at number 1 in the classical chart. In June 2018 he received the Male Artist of the Year and Critics’ Choice at the Classic BRIT awards. 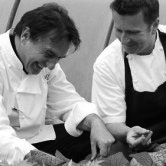